The Shroud of Turin

Isaiah 25:7 “On this mountain [He] will destroy the [burial] shroud, the shroud over all the peoples, the sheet covering all the nations;”

The History Channel aired “Was this the face of Jesus?” I had the pleasure of Michael’s company when I viewed the show; Michael told me that his correct likeness being decoded is another sign of the end times for people to ponder about; since the Shroud can neither be proven nor disproven considering whether or not it depicts Michael as the Christ, it is like all other things of Yahweh – it rests on common sense and faith – and a little decoding of the pics.

Michael also clued me in on this: He normally wore short hair, because it was considered neat by Father that Her priest be presentable in a certain way. Christ was of the highest priesthood:

Ezekiel 44:20 “They may not shave their heads or let their hair grow long, but must carefully trim their hair.”

What occurred, was that Mary Magdalene used to trim his hair and beard, but because of the many things occurring prior to his arrest, the trimming had not taken place; at that point in time Jesus’ hair had grown longer and then when he was taken into custody he did not have the convenience of having his body looked after by those that normally nurtured his physical needs; this is the reason his hair was the length it was at the time he was shrouded; Mary did not cut it at his burial because at that time they were only able to watch as he was entombed; later, she had every intention of making his deceased body presentable, but the opportunity did not arise because among other things the stone rolled into place was huge, so they decided to wait and later do the anointing of his body; however, that would never take place by them; that was to be reserved for and by Christ’s Mother of creation with a new perfected body like he previously had at his start in creation. In other words, his former spirit body was restored with added features.

Mark 15:42-47 “The Burial of Jesus When it was already evening, because it was preparation day (that is, the day before the Sabbath), Joseph of Arimathea, a prominent member of the Sanhedrin who was himself looking forward to the kingdom of God, came and boldly went in to Pilate and asked for Jesus’ body. Pilate was surprised that He was already dead. Summoning the centurion, he asked him whether He had already died. When he found out from the centurion, he gave the corpse to Joseph. After he bought some fine linen, he took Him down and wrapped Him in the linen. Then he placed Him in a tomb cut out of the rock, and rolled a stone against the entrance to the tomb. Now Mary Magdalene and Mary the mother of Jesus were watching where He was placed. ”

Mark 16:1-8 “Resurrection Morning When the Sabbath was over, Mary Magdalene, Mary the mother of James, and Salome bought spices, so they could go and anoint Him. Very early in the morning, on the first day of the week, they went to the tomb at sunrise. 3 They were saying to one another, “Who will roll away the stone from the entrance to the tomb for us?” Looking up, they observed that the stone—which was very large—had been rolled away. When they entered the tomb, they saw a young man dressed in a long white robe sitting on the right side; they were amazed and alarmed. “Don’t be alarmed,” he told them. “You are looking for Jesus the Nazarene, who was crucified. He has been resurrected! He is not here! See the place where they put Him. But go, tell His disciples and Peter, ‘He is going ahead of you to Galilee; you will see Him there just as He told you.’ “So they went out and started running from the tomb, because trembling and astonishment overwhelmed them. And they said nothing to anyone, since they were afraid.”

Also, don’t forget that Michael changed his appearance after appearing as he had looked before his execution to none other than Mary Magdalene when he would later materialize again but with a different appearance in looks; the body he offered up was taken to Heaven by Holy Angels to be presented to Yahweh, and from there Yahweh encapsulated the body at Her throne as a reminder of the Sacrificial death that Christ Jesus had committed to for Her Great Name’s sake and for deliverance from sin to the offspring of mankind; in essence, it represented tangible payment for all that he redeems from sin and is never out of Father’s sight.

Mark 16:9-13 “Appearances of the Risen Lord Early on the first day of the week, after He had risen, He appeared first to Mary Magdalene, out of whom He had driven seven demons. She went and reported to those who had been with Him, as they were mourning and weeping. Yet, when they heard that He was alive and had been seen by her, they did not believe it. Then after this, He appeared in a different form to two of them walking on their way into the country. And they went and reported it to the rest, who did not believe them either.”

You should see how he appears to me. lol He is nothing less than Michael split off from his Christ half.

Now that we have that out of the way, I’ll point out some things the investigators of the Shroud are missing as to its authenticity:

This is one of the pics off the History Channel: 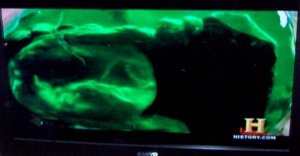 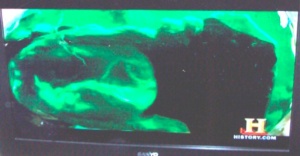 Study these, and discount the fingers of the investigator.

In the above, note the evil face to the right.

That is the face of Christ Jesus; it’s amazing, but all is eventually brought to the light. Note the “3” on his forehead. 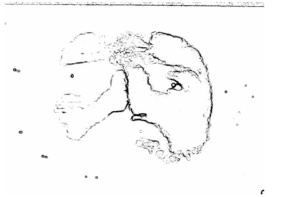 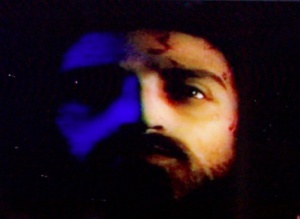 Next, I’ll show you what SKETCH reveals of this same pic; it is what we’ve been revealing to all of you about the split in Christ Jesus’ energy; one for Salvation, and one for the wrath. 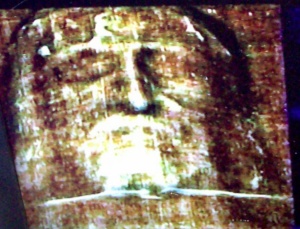 About the coming energy split that eventually occurred.