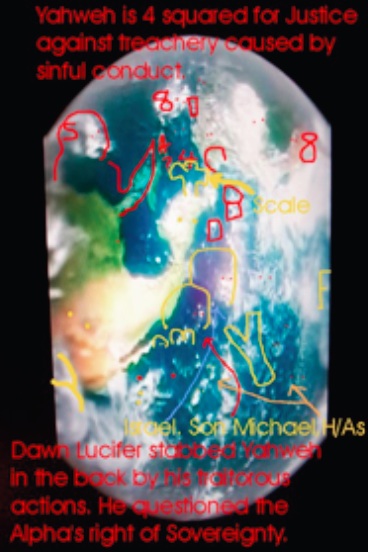 We are surrounded by the evidence that Dawn Lucifer was a traitor, and sought to defy Israel because he did not believe She would take on Her male attribute of Yahweh the Warrior to square the sinful conduct perpetrated against Her Royal Crown.

He confused love and justice for weakness when combined. He was wrong on that assumption.

As Christ spoke in the past – “Don’t assume…”

We are living in a fishbowl. That is why the earth’s affairs are a theatrical spectacle to those in the spirit realm. All things both seen and seemingly hidden are in full view.

1 Corinthians 4:9 “For I think God has displayed us, the apostles, in last place, like men condemned to die: we have become a spectacle to the world and to angels and to men.”

Mother has unveiled everyone and everything – even the safe zones are not concealed from Her eyes.

Jeremiah 16:17 “for My gaze takes in all their ways. They are not concealed from Me, and their guilt is not hidden from My sight.”

Those thrown alive into the Orange Plane prison are bombarded by their dead comrades considered as waste.

Nahum 3:6 “I will throw filth on you and treat you with contempt; I will make a spectacle of you.”

Those of mankind that commit treacherous crimes in secret, they are watched in secrecy by the holy ghosts that serve as witnesses against them (observers of conduct) in the assembly of Heaven where all is revealed to those that will mark them with a hook and apprehend them for justice to take its course against all evil perpetrated in our Mother’s creation. No sin goes unnoticed.

Proverbs 26:26 “Though his hatred is concealed by deception, his evil will be revealed in the assembly.”

Criminals seek to conceal their crimes from mankind, but all is revealed on the other side where true justice is meted out.

Genesis 37:24 “Then they took him and threw him into the pit. The pit was empty; there was no water in it.”

Each criminal of creation passing to the other side is incarcerated in a dark realm where they thirst for relief from what was awaiting them.

And even the nation of the earth cannot escape the treachery they have perpetrated. Yahweh sinks them farther into the pit of desolation they’ve created by following Satan’s guidance coupled with our Mother’s intervention.

Psalm 9:15 “The nations have fallen into the pit they made; their foot is caught in the net they have concealed.”

Balancing the scales of justice against those whom are non repentant and do not come under the Ransom Sacrifice.

Deuteronomy 19:21 “You must not show pity: life for life, eye for eye, tooth for tooth, hand for hand, and foot for foot.”

2 Samuel 22:2-4 “He said: The LORD is my rock, my fortress, and my deliverer, my God, my mountain where I seek refuge. My shield, the horn of my salvation, my stronghold, my refuge, and my Savior, You save me from violence. I called to the LORD, who is worthy of praise,and I was saved from my enemies.”

To be taken to a stronghold by deliverance on to the Mountain of Mother Israel, where refuge from the coming horrendous violence will be provided. With Yahweh, no one can touch us, because our Mother is Israel upon Mount Zion.